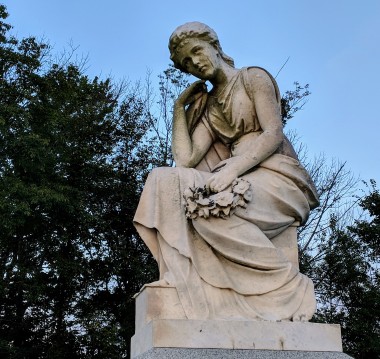 Recently, I heard it was my fault someone else was emotionally triggered.

I find this confusing.

First of all, I don’t know who this person was but apparently, I kicked a hornet’s nest.

Secondly, I wasn’t intending to trigger anyone. I was sharing my truth about something. Someone took offense, didn’t like it, got upset, and were triggered. Apparently, it’s my fault for not being more sensitive to their pain. I couldn’t even tell you what it was I said because there was no conversation, just arrows.

If I tell you my truth and it upsets you, I’m being insensitive. If I only partially respond to it, it’s trickle truth. If I tell you what you want to hear to protect your feelings from being triggered I’m lying. If I say nothing I’m not being empathetic.

Nothing confusing about that, right?

Also, don’t tell me what it is that actually upset you, I should know from the sulking and contempt by which I’m met, right?

We certainly are an unskillful and complicated species.

I understand if someone is a rape victim talking about a rape I heard about is a trigger. As such, if I know, I don’t ask about it unless they bring it up. Same for domestic violence, incest, and a host of other deep traumas. I get the power of triggers. There was a lot of verbal and physical abuse in my upbringing coupled to a lot of trauma. I’m not insensitive even if by arbitrary and subjective standards I seem like I am.

However, if you single me out, pile on, and threaten me, my knee jerk reaction is to fight back. I might flee if I see the conflict coming but once it’s here, I fight. I don’t flee. That is the reason that when my betrayal was revealed, I didn’t run: the fight was here and I’d take my lumps and fight for my relationship. I didn’t flee.

That is also how I respond to childhood trauma as an adult. As such, when I see others being bullied or harassed I fight for them too. It’s the hero in me.

Somewhere along the line, I made a conscious decision long ago that the best way to deal with a bully, if it cannot be avoided, is to strike hard. Usually verbally. Most bullies are cowards needing an audience to thrive so I just call them out.

As such, the simplest way to say it is, I am triggered by bullying.

Here’s the thing. It’s not the asshats fault I’m triggered. It’s not his fault if I snap back. It’s not their responsibility not to trigger me.

But I realize, as I plow through my shitheadery, that just because I am triggered doesn’t mean someone is being an asshat. Nor is my emotional flooding their intention.

Most importantly, once the dam is broken, no one else can put it back behind the levy. It’s out…it has to run the course and at the end, I am ultimately responsible for cleaning up the mess. Others can provide tools, hold my hand, listen, but ultimately the work is mine.

As such, once I get perspective, 99% of the time I recognize my response was personal to an action that was unintentionally hurtful. It is simply the way I took it, internalized it, and responded. Only an asshat is pushing buttons intentionally but Intentional or unintentional it’s my issue.

Unfortunately, even then it isn’t personal except I made it so.

As such, here is the thing: if I want to be less trigger-happy (triggery? triggered?) I need to deal with my shit. Me. No one else. Others aren’t doing it to me, they are simply just doing it. I need to separate someone else’s shitheadery from mine.

That also means as I deal with my flooding, I’m not avoiding It, hiding from It, or running from It. Dealing with my flooding means I stand in It, let It wash over me, hear It, face It, and most importantly, learn from It. I don’t allow myself to be abused, assaulted, or bullied but I also need to focus on learning and practicing a better skill for addressing the issue.

Out of the gate, ill-intentioned people used my betrayal of © and K as justification to project shit on me in verbally abusive ways, including the threats of physical assault, lies about me and my motives, and of course, when convenient, silence and rumormongering.

Those actions struck my family of origin triggers, they were organized to reinforce my shame, and they were intentionally motivated to hurt and harm me personally and professionally.

And unfortunately, too often it is the behavior of people too damaged to be aware of their own motives for using labels and self-congratulatory character assassination so they never own their part in the conflict. They are perpetual victims.

And unfortunately, for the first five months, I took it personally and responded to the outsiders’ nonsense. At the time, it didn’t make perfect sense, but it made some sense to defend myself, C and our life together. In reality, Dolly, among others, really helped me gain some perspective (I am deeply grateful to her and others).

Unfortunately, at the time I responded to them as aggressively, defensively, and at times inappropriately, as they did to me. You kick a wounded dog when he is down and he will bite. For them it was a game, for me it was my life.

Fifteen intense months later I see more clearly how I hurt the people that love me, and I love because we all hurt. As such, I understand C and K’s behaviors too. We all have a lot in common.

I even understand the motivations of the peanut gallery and Flying Monkeys. It is, as my good doctor reminds me, “if you spot it, you got it.” It is easier to project their issues onto me than face themselves.

Although better, every now and then I’m still defensive and fight back. There are reasons. For example, I sometimes confuse ignoring, avoiding, and blocking, as cowardly, unmanly, and fleeing. Sometimes I even think walking away is a continuation of conflict avoidance so I try to turn back to it. It’s hard to remember walking away from a fight full of shitheadery and triggers with compassion is adulting and skillful.

I’m good with words, I waste no time in finding a place to slit the emotional throat, or at least try to land a throat-punch. I don’t generally start a fight (conflict avoidant) but I sometimes have difficulty walking away from it once it starts. And I don’t always fight fair.

And that means, not fighting fair is figuring out their emotional trigger and nuking it. Because if someone is going to hurt me with intention, I will hurt them back. I’m better at this now. I’m slower to respond, I’m more patient, and I usually fire a warning shot first.

But once I’m in, I’m in. For example, a passive-aggressive asshat recently referred to me as a “serial cheater” and narcissist. I ignored him because I know better, but knowing his wound, I suggested he was referring to his wife.

Clearly a dick move on my part…but no different than him talking about me without actually having the courage to talk with me. He showed up in the middle of a conversation, tossed some sarcasm, passive-aggressive accusations past me, offered nothing vulnerable or meaningful – just more labels – and then cheered as the conversation devolved.

Hurt people hurt people…and I snapped back escalating the problem instead of focusing on my desire to keep my center and my truth.

I don’t want to be the over-sensitive, unskilled, and over-reactive man that allows himself to be emotionally manipulated by people to afraid to face their own pain. People only cutting me so they can feel better about themselves.

In reality, I hurt for him too. I know how frightening it is facing our own grief. It’s easier to be a bitch than deal with the issue. I’ve been there. I don’t want to simply hurt people back. I want to be the man that breaks the cycle in my life. 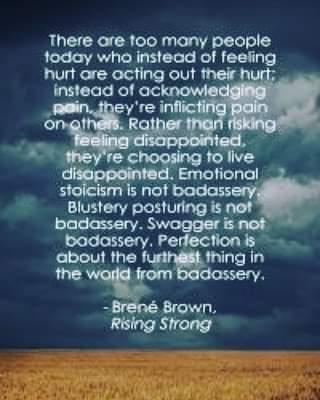 As time has passed, I’ve come to ignore those that cannot contribute much more than labels, sarcasm, and contempt. They don’t know me and they don’t have anything meaningful to add as long as they are hiding behind bravado and badassery.

I’ve also realized I don’t have to go to every fight I’m invited too just because someone is being a shithead. If I go there now it’s because I made a choice and lack the skills to manage it well. Friday I made an unskillful choice. I’ll do better next time because now I am conscious of it. As I said, I’m consciously unskillful. Therefore, I recognize I cannot be triggered if I know where the trigger is.

Sometimes I still don’t know where it is…or what it is about…but I am focused on developing the skills that help get me to the solution sooner.

Of course, not every trigger is about my trauma. Some of my triggers are driven by immaturity and complicated by unskillfulness. I’m working on it. Adulting is difficult.

Unfortunately, 50 years of inertia makes learning difficult, and there are always people, contrary to their pleas, that benefit from the status quo. They prefer the role of victim. As Personality Hackers podcast, Surrendering to the Work, discuss, we often feel entitled to let someone else do the heavy emotional lifting for us. In the podcast we are called to task for claiming, “I shouldn’t have to work this hard in a relationship! If we’re fighting a lot it must be their problem. I’ve fully formed it’s them that needs more training.”

Skill development is hard after so many years of patterns with partners also feeding on the patterns. It is work and I am trying to surrender to the process with intention.

In reality, there will always be people who are asshats vomiting up their shitheadery. Sometimes it will even be me.

Naturally, it’s easier than dealing with the triggers. Hurt people hurt people. We hide behind the mobs of other hurt people to form bonds of common enemy intimacy and seek approval from others for acts of cruelty and emotional unskillfulness.

After all, from the inside, a mob looks like a tribe. 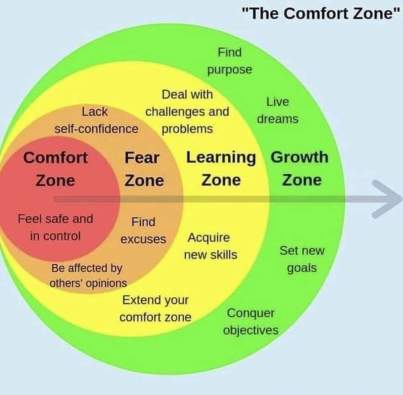 However, most people are simply trying to learn, get along, and like me, want to make it right. They aren’t trying to hurt me, trigger me, or make it worse. They are just trying to get through their day…just like me.

However, regardless of their perspective, if I don’t want to be triggered, it is up to me to address the triggers. My healing is my responsibility. My triggers and ensuing pain are my Friends, reminding me something is still unhealed and unconscious, waiting to be uncovered and loved.

Moving forward I need to remind myself to keep meeting other people’s unskillfulness with generosity. If I do that it is less difficult to be triggered.

For this reason alone I appreciate the asshats: they force me to move away from the problem and towards a solution, embrace my boundaries, and find my center. They don’t make me a better person, I do that…but they do allow me to look inward to the pain so I can hear more clearly where I am lacking skills and to become more conscious of where I am going next.

As my good doctor reminds me, “Sean, tend your own garden and let all the shitheadery be fertilizer.”